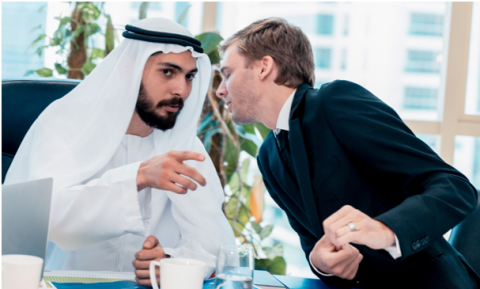 Interpreting is the spoken translation of content from one language into another.  So what’s the difference between consecutive and simultaneous interpreting?

Both modes of interpretation help bridge language barriers, but they require different skill sets and are for different situations, so it is good to understand which one to choose.

When you have a meeting, conference or live event and the speaker needs to be immediately understood by the listeners then simultaneous interpreting on-site is often the best solution. Listeners should wear headphones so some form of interpreting technology is required. When several languages or large groups of people are listening to a speaker then it is also important that the interpreters are in separate sound-proof booths. It also helps if the interpreter has a clear view of the speaker and excellent audio and microphone connections.

Although interpreting of this kind requires tremendous concentration the process of listening, understanding, translating and speaking within a few seconds is only marginally slower than the actual speaker’s sentences. The time saved means that communication is relatively instant and it is easier for listeners to react or to follow the speaker. And, many languages can be interpreted at the same time for different listener groups.

Simultaneous interpreters tend to translate into their native languages and work in teams of two, swapping over every 45 minutes or so. Providing reference material to the interpreter prior to the event enables higher quality translation as the interpreter has to react and translate rapidly and often doesn’t know what is going to be said next.

In some cases where a language is less common relay interpreting is important. For instance, the German speaker’s message is translated first into French, English or one of the European languages and then a second interpreter translates from this language into the third language e.g. into an Indian or Arabian dialect.

Additionally, Video Remote Interpreting (VRI) now enables visual communication during the interpreting event even though the interpreter is physically located elsewhere. This form is becoming increasingly popular as it reduces costs and travelling time, but it does require the right telecommunication system.

Press conferences, interviews, court testimony, medical consultations or many one-to-one meetings often take this form. When possible it helps if the speaker pre-plans the speech pauses as the flow of communication is interrupted by the switch into the foreign language. Therefore, a conversation can take double the normal time and meetings should be planned accordingly. Consecutive interpreters have to jump between their two languages as they are often the only interpreter present. Interpreting accurately and consistently for the entire session is a truly demanding task.

Telephone interpreting is another form of consecutive interpreting often used for emergency services or short conversations. The interpreter joins the speakers in a telephone conference and supports bilingual interpretation consecutively. But, one drawback is the lack of visual information so context, gestures and expressions aren’t communicated which means that translation accuracy in specific situations might suffer a little. On the other hand, participants can be geographically located in different places so there are no travel costs or time delays for the interpretation.

Both main forms of interpreting are effective solutions for diverse face-to-face events and enable the speaker to actively communicate with the listeners. Some interpreters prefer one form over the other so it is essential to select a professional interpreter with the right qualifications and experience.

Do let us know if you have any questions as we can advise you how to make your multi-lingual event as successful as possible for all participants.

Where to find us

Merle & Sheppard Language Consulting uses cookies to make your experience of our website better. We ask for your consent to set these cookies. If you do not wish to accept our usage of cookies then we expressly ask you not to use our website. Find out more